For this week’s post, I am delighted to be sharing with you a recent interview that I snared with film scriptwriter & director, Paul Herbert, whose latest short film project, The Flight of Iro and Casper (2015), is to be screened at the upcoming Blueprint Film Festival in Glasgow.  Having really enjoyed previewing the movie, it was great to have an opportunity to discuss Paul’s creative process and how he moves his the inspiration behind his writing into screenplay and film form.

Q: Hi Paul, thanks for agreeing to be interviewed for my blog. You have written, produced and directed several short films. Do you consider film making to be your career and how did you get into the industry to begin with?

A pleasure, Susie! I was first involved in film between the years of 1998 and 2000 when me and two other friends set up a production company called Avalanche, through which we made a couple of shorts (I was on the production side in those days).

Forming this company motivated me to write three feature scripts during that time, all of which were shelved or unfinished. However, one of the scripts received very good reviews from the 2001 Orange Prize. I then got into writing pretty much consistently and have written several more screenplays.

I have also frequented lots of courses and read a lot of books on the mechanics of screenwriting, plus I’d watched countless movies since the age of eight.

My main job is teaching EAP at University and so in 2012 I discovered that as a member of staff I was allowed to borrow their film equipment.  This prompted me to make my first short film, Autumn Drift, which cost me around £120 to produce. Then I just got going forward. I’ve never been to film school – I am self-taught and feel I am always building on previous projects and improving upon them, I’ve just finished my fourth short film and fifth project, called the English Lesson, and feel it’s the best film so far! 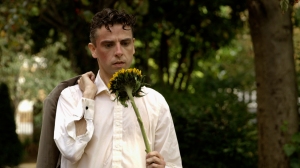 Q: Could you describe your creative process?

I’ve always loved originality and before I write a script I think of original ideas. I have always loved the crackpot filmmakers such as Derek Jarman, Bruce Robinson, Peter Greenaway, Wes Anderson, and I’m a great fan of the Theatre of the Absurd, and British madcap comedies – I love the power of metaphor, as Charles Baudelaire once said ‘who would ever perform the sterile function of imitating nature.’ That’s how my brain works. My writing process takes 8 months to a year. The English Lesson took around 8 months, Iro and Casper 11 months, Winter Will, six months – a feature script.

The first idea I get is the theme followed by a rough story – normally ending and the main character who is often one of life’s underdogs.

Q: Do you collaborate with others at the writing stage? Describe this process.

No, it’s a lonely process – I have collaborated with one co-writer in the past and together we wrote the feature, Small Fortune – but usually it’s me on my own. The English Lesson treatment stage was a collaboration between me and my editor and friend CJ Lazaretti – this involved me thinking of storyline and him giving me suggestions.

Q: Film making must be a huge time and financial commitment. How do you go about budget setting and sourcing funding?

I slash my costs by getting things for free and by crowdfunding. The English Lesson was nearly 20 mins in length and, as my best film to date, it cost me £1177 plus crowd funding of 300 quid. Iro and Casper cost me £4000 but I raised £2000 from family and friends – I’m getting better at this process. 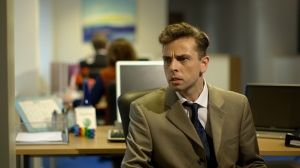 Q: How do you go about picking your production and editing team? At what stage do you start mustering bodies?

I start mustering bodies during script stage – normally an editor, a DOP and some actors, but most come during pre-production.

Q: Do you have a formal constructive critique process following the wrap/before submission?

I do at the script stage, I have my script edited and have it circulated among people for feedback – I try to get it as perfect as I can, but I’m still learning like everyone else. Also editing can be a learning curve for me, usually stuff I had in mind at script stage is often neglected in the editing stage and lots of footage which I’d originally envisaged in the film gets binned – which is a big shame but in the end its the final product that counts.

Q: Have you ever abandoned a film part way through?

Never, and never will – what I start gets finished.

Q: Casting the right actors must be challenging. Describe your experience of the process.

It’s a nightmare when you haven’t got money. For Iro and Casper, I got my man, Liam, but for the English Lesson I got my third choice – this was because when actors aren’t paid their priorities lie elsewhere. It can be very frustrating – this also happened during Winter Will. I lost my lead within 3 weeks of shooting, but you can’t prevent this from occurring, you have to forget about your woes and just get on with it, you haven’t got time to cry – you have to live with it – all part of the process.

Q: You have had great success with your films, featuring on the bills of shorts festivals etc. How do you select which outlet you plan to submit to? What do you think has given your films an edge in being selected/successful?

Iro and Casper has just got into its 6th festival and there are more on the horizon, but this whole PR part is a learning process for me. I have recruited a publicist for The English Lesson who will help promote the film.

Q: You straddle several disciplines behind the scenes. Do you have any tips for aspiring script writers/movie makers in making their mark?

Just keep plugging along and don’t give up, don’t let the hard times bite, if you believe in yoursef, you will get there.

Q: Who is your favourite film writer/director and why?

Stan Kubrick is a god to me, I adore his films – Wes Anderson, Terry Gillian, John Sayles, Paul Thomas Anderson, Coen (old stuff not so much new) Billy Wilder, Woody Allen (his older films like Sleeper, and Annie Hall, that kind of stuff).

Q: What are your plans for the future?

Make more movies – a couple more shorts to perfect my craft and then I’ll do a feature, which’ll probably have to be a £10,000 job – which is a micro-shoestring – but I’ll do it! 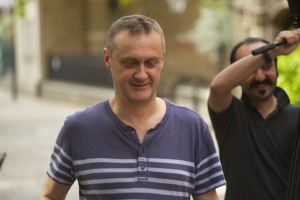 Thanks again go to Paul for this hugely insightful chat into the world of film making and scriptwriting.  You can watch Paul’s latest film short: the brilliant Flight of Iro and Casper (2015) by clicking HERE and then logging in using the password: greenWICH446

To find out more about Paul and his film projects visit his website at: http://www.bluejohnproductions.co.uk